Skip to content
Home » What You Need to Know About Hay 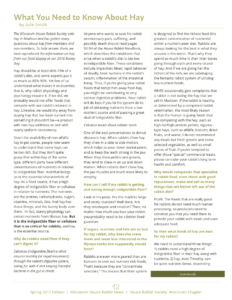 The Wisconsin House Rabbit Society sells hay in Madison and has gotten many questions about hay from members and non-members. To help answer them, we have reproduced the information on hay from our food display at our 2016 Bunny Day.

Hay should be at least 60%-70% of a rabbit’s diet, and some experts put it as much as 80%-90%. Yet few of us understand what makes it so essential, that is, why rabbit physiology and psychology require it. If we did, we probably would not offer foods that compete with our rabbit’s interest in hay. Likewise, we would shy away from buying hay that has been turned into something it shouldn’t be—a product with non-hay additives or one with overly uniform consistency.

Given the availability of non-alfalfa hay in pet stores, people now seem to understand that some hays can be too rich. But they don’t quite grasp that within hay of the same
type, different parts have different concentrations of nutrients in relation to indigestible fiber. And that brings us to the essential characteristic of hay. As a food source, it has a high degree of indigestible fiber or cellulose in relation to nutrients. The nutrients are the protein, carbohydrates, sugars, vitamins, minerals, fats. And hay has those things, and the bunny body uses them. In fact, bunny physiology can extract nutrients from fibrous hay. But it is the indigestible fiber or cellulose that is so critical for rabbits, and hay is the essential source.

Why do rabbits need fiber if they can’t digest it?

Cellulose (indigestible fiber) is what ensures motility (or rapid movement) through the rabbit’s digestive system, taking fur with it and keeping harmful bacteria in the gut in check.

Anyone who wants to save his rabbit unnecessary pain, suffering, and possibly death should read pages 92-94 of the House Rabbit Handbook, which describes the conditions that arise when a rabbit’s diet is too low in indigestible fiber. These conditions include impaction; bloat; rapid takeover of deadly, toxic bacteria in the rabbit’s cecum; in inflammation of the intestinal lining. Thus, if you’re giving your rabbit foods that tempt him away from hay, you might be contributing to very serious digestive problems. Your rabbit will do best if you let his system do its job of obtaining nutrients from a low- nutrient source and of passing a great deal of indigestible fiber.

One of the best preventatives to dental disease is hay. When rabbits chew hay they chew in a side to side motion, which helps to wear down dental points and to keep the teeth strong in the jaw. When they chew pellets and greens, they tend to chew in an up and down motion. When rabbits don’t chew hay, the jaw muscles are much more likely to atrophy.

How can I tell if my rabbit is getting and eating enough indigestible fiber?

Look at his poop. Are the marbles large and nicely rounded? Well done. Are they misshapen and smallish? Then, no matter how much you love your rabbit, you probably need to be a better food guardian.

If sugars, starches and fats are so bad for my rabbit, why does she crave them and seem less interested in the fibrous stalks she supposedly should have?

Rabbits are even more geared than are humans to seek out nutrient-rich foods. That’s because they are “concentrate selectors.” This means that their system is designed to find the richest food (the greatest concentration of nutrients) within a nutrient-poor diet. Rabbits are always looking for the best in what they assume is the worst. That’s why they spend so much time in their litter boxes going through each and every strand of hay. And if we are giving her the richest of the rich, we are sabotaging the fantastic rabbit system of utilizing low-nutrient foods.

WHRS occasionally gets complaints that a rabbit is not eating the hay that we sell in Madison. If the rabbit is healthy, as determined by a competent rabbit veterinarian, the most likely reason is that the human is giving foods that are competing with the hay, such as high-fat/high protein pellets; legume- type hays, such as alfalfa; biscuits; dried fruits, and worse. I do not recommend any treats but fresh greens and some selected vegetables, as well as small pieces of fruit. If you’re tempted to offer those “special” commercial treats, please consider your rabbit’s long term health and comfort.

Why would companies that specialize in rabbit food, even those with good reputations, make and sell so many things that are better left out of the rabbit diet?

Profit. The foods that are really good for rabbits do not need much human processing, so producers need to convince you that you need them to provide your rabbit with treats and even adequate food.

So then what kinds of hay are best for my rabbit?

We need to understand three things:
1) rabbits need a high degree of indigestible fiber in their hay along with nutrients;
2) hay, even Timothy, can be quite nutrient dense, depending on what part of the plant we’re talking about and when in the growth cycle it was cut;
3) As a rule, we can say that the greener the hay, the more nutrient dense it is and the less indigestible fiber it has. And here’s what’s happening as people demand the “premium” hay for their rabbits:

Many pet owners with whom we deal buy hay based on its visual appeal— dark green, leafy, soft. This equates to hay that is very high in nutrients, high in protein, possibly high in fat, high in calories, and definitely low in fiber. The consumer driven hay market has continued to demand ever more “beautiful” premium hay, and it is our belief that we now have on a consistent basis, hay that is almost “too rich” for the normal house pet.
(http://rabbit.org/hay-in-your-bunnys-diet/)

We would say, then, that the best hay you can get is local hay with a mixture of green and brown leaves and stalks.

The ratio of green to brown will vary with the season. If rabbits are rejecting their hay, the most common reason is that they are being given other food that is by comparison richer. Thus, if your rabbit is a poor hay eater, have her checked out for illness by a competent rabbit veterinarian who can also check her for dental problems, which may explain her lack of interest.  If she is fine, then start thinking about how to slowly modify her diet to one that is hay-based. Remember, an important mental activity for rabbits is investigating and selecting what they will eat. They love pawing through a pile of hay to find “the right piece.” This is an important activity for their psychological well-being. Being choosy, they are going to leave some hay behind by the end of the day. That does not mean that they do not like their hay. You should discard the leftover hay and give a new big handful each day and let her spend lots of time evaluating which strand is rabbit-worthy!

Suppose I buy hay locally in the bale or half bale. How long will it last?

If stored properly, it can last up to two years. It should be stored indoors, at room temperature or cooler, in a dry location out of the sunlight, which can leach nutrients. Choose a container that is not airtight. A bale that has not been cracked open doesn’t need a container at all, nor does an open bale that will be used within a few months. The main reason for containers is that they control the mess for humans. The hay needs to breathe—so do not put it in plastic bags. As hay still has about 15% moisture content, a sealed bag or container can cause harmful mold.

All information in this handout has come from the House Rabbit Handbook and from articles on hay at www.rabbit.org.

I am indebted to Dr. Michael Wenninger, Spartan Animal Hospital, McFarland, for reviewing this article for medical accuracy.